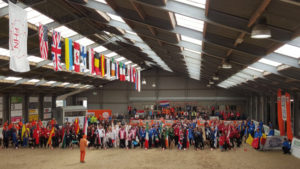 Day 2 of the IFCS World Agility Championships features Individual Snooker, the first of the Individual All-Around classes, and the national team Triathlon Jumping class.
The Russian team dominated capturing 8 of 12 medals awarded in the Snooker class, with Canada, Italy and The Netherlands taking the other four.

Day 3 of the IFCS World Agility Championships featured Individual Agility and Jumping, the second and third classes in competition for individual discipline honors and the Individual All-Around awards.

Classes included in the medal counts:

Day 4 of the IFCS World Agility Championships featured Individual Gamblers class, the fourth and final class in the Individual All-Around competition and the Team Triathlon Standard Agility class, 2nd in the series.

Classes included in the medal counts:

The final award ceremony included recognition of the judges and volunteers, as well as the more than 200 competitors from 16 countries.  Congratulations to all medalists!  Thank You to Team USA!